PWA (Progressive Web Application) is a type of application software delivered through the web. PWA was first described by Google in 2015. It is accessible through URLs and indexed by search engines. PWA is developed using common web technologies like HTML, CSS & JavaScript. The most important feature it holds is that it can work offline, reliable, fast downloading, and it is platform-independent.

Every app had its own pro’s and con’s. Likewise, the most important benefits of PWA is listed below

▪ Native mobile apps are installed through an app store such as Google play store or Apple’s iOS app store.
The app will appear on the home screen after installation. Whereas, PWA runs straight from the mobile device browser. Users can straight away ‘Add to Home Screen’ from the browser.

▪ Developers develop a native app in such a way to work on a specific platform. In case of PWA, developers create the responsive instance of the PWA and publish it. It’s just an app to develop and it can shape itself to fit into any platform. ▪ PWA can work offline by utilizing cached data where native mobile apps cannot.

▪ The native apps which is used frequently and be forgotten to close out altogether may consume more power/battery, storage space and mobile data as well.

▪ The cost of maintenance for native apps are high compared to PWA. 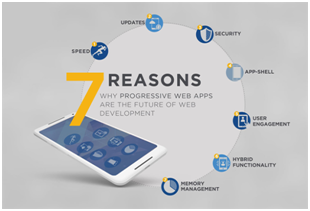 Since a few decades, web developers have been adored to responsive web design patterns to make each website display well on specific devices in terms of large and small screens. The responsive web design is not likely to meet user satisfaction in case of variety of devices with different window or screen size. On contrary, PWA responses itself to any platform and works offline as much as online. PWA is now used by many major companies like Twitter, Instagram, UBER, OLX, Makemytrip, Starbucks, Tinder etc., For instance, Twitter Lite Progressive Web App allowed social media to achieve 75% increase in tweets sent and 20% decrease in bounce rate by delivering a fast, reliable mobile web experience. Twitter Lite is now the fastest, least expensive and most reliable way to use twitter- said by a user. PWA is the booming mobile web apps solution towards the future.

As the world grows with new technology onsets, we learn to adapt and update ourselves with the new growing world. It is much important to lead a life forward with updates. Testware Informatics is one with young and energetic team members. As like every other company, Testware Informatic’s team is also trapped with responsive mobile apps, motivated themselves to learn the new technology, and monitor the user survey, they have now switched over to adapt to the future technology (i.e., PWA). As a starting point, Testware Informatics has turned its own site into a Progressive web app and also developed a few other exclusive PWA enabled real-time web applications. We build highly secure and fast-loading progressive web apps to maximize user engagement. We are proud to take forward this next-generation solution and what about you?
Want to know more (or) looking to build progressive web apps?
Reach us immediately. www.testwareinformatics.com
Please mail your interest to [email protected]

Thank you for subscribing!